E.ON has welcomed the approval of its application for Enoch Hill Wind Farm by the Scottish Government following a Public Inquiry. The 16-turbine site will be located west of New Cumnock in East Ayrshire and will be capable of producing around 54.4MW of electricity.

“We’ve worked for several years to design this project, during which time we’ve taken on board considerations from many stakeholders as well as feedback from the local community. We look forward to working closely with the Council and local residents going forward.” 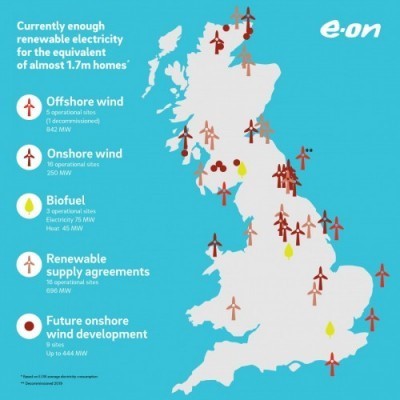 Since launching its Enoch Hill proposals in 2012, E.ON has worked closely with the local community and undertaken extensive consultation to understand any concerns. E.ON will continue to work with them via the Community Liaison Group for the next stage of this project.

E.ON already owns more than 20 onshore and offshore wind farms in the UK, as well as biomass plants in Scotland and South Yorkshire, and has invested more than £3.3 billion in UK renewables in the last decade.

E.ON built its first wind farm on Anglesey in 1992 and was a partner in the UK’s first offshore wind farm – Blyth in Northumberland – in 2000.

Earlier this year the company announced that all residential customers are now provided with a source of electricity backed entirely by 100% renewable sources. More than three million homes now have an electricity supply matched by renewable sources including wind, biomass and solar – the largest offering of its type to date in the UK.

Visit eonenergy.com/renewable to find out how E.ON can help customers find an energy solution that is smart, sustainable and personalised for them.